In an interview with the Department of Information, the Premier disclosed the recent history which made the Four Seasons reopening a reality.

“From the 1st to 7th Oct 2008 owners defaulted on a US$ 126,700,000 loan, then on the 16th October 2008, Hurricane Omar caused flooding and water damage to Four Seasons Resort Nevis, and the hotel closed.
The NIA ensured that Four Seasons workers remained employed in the short term and I warned Four Seasons workers of imminent layoffs and urged them to plan appropriately,” said the Premier.

In May 2009, Four Seasons laid off 600 workers. In August, the NIA lobbied successfully for the payment of redundancy payments to the workers.

Premier Parry said he made it clear and insisted that the Four Seasons should continue as the hotel operators, saying “no” to any other brand suggested by the hotel owners in January 2010.

According to the Hon. Joseph Parry, Capstead filed a suit of Involuntary Bankruptcy on “Hotel Equity Fund V, LLC” in Wilmington, Delaware, USA. This froze all payments, including wages due on the 31st March 2010. 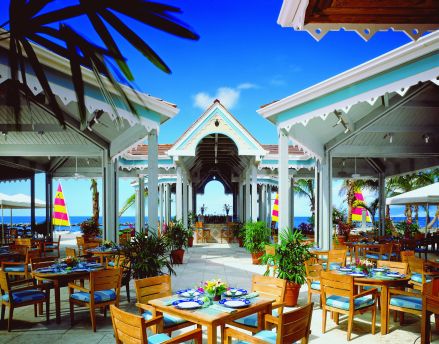 “If this was not addressed immediately, the net result would have been no payment of salaries for the month of February; A further loss of 263 jobs and in all likelihood it would have caused the permanent departure from Nevis of the Four Seasons brand,” stated Premier Parry.

Premier Parry sent two written depositions to the Delaware, USA Court and consulted with the defence team by teleconference on 24th March 2010, further emphasizing the importance of the Four Seasons Resort and the Four Seasons Brand to Nevis, and the devastating impact to the Nevis economy that the loss of the Four Seasons and any further loss of jobs would have.

“This line of argument proved essential in persuading the Judge to uphold the Emergency Motion, said Premier Parry.

On 25th March 2010, an   Emergency Motion was made to allow the payment of salaries due on the 31st March 2010, along with other expenses, while the Involuntary Bankruptcy proceedings were filed.

The Crown Council from the Attorney Generals’ office gave evidence on the laws of St. Kitts and Nevis, which were essential in persuading the judge to allow foreclosure of the property to take place in Nevis.

The Premier said he listened live via teleconference to the court hearing in Delaware. “Thanks to the excellent job done by the Crown Council it was unnecessary for me to give evidence,” said Mr. Parry. 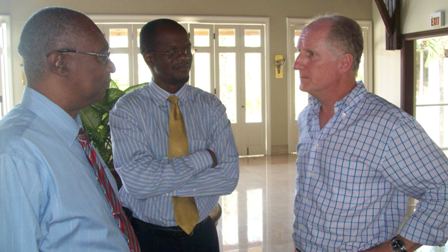 On 29th April 2010, the NIA took unprecedented proactive steps towards organizing and joined with the Four Seasons Villa Owners and the Creditors to commit funding and guarantee to the completion of final renovation work of the Four Seasons Resort Nevis.

According to the Premier, this prevented the huge delays of the reopening date that would have been caused by any delay in the ongoing mobilisation for the final renovation work.

The suit of Involuntary Bankruptcy on “Hotel Equity Fund V, LLC” in Wilmington, Delaware, USA, was dismissed on, 6th May 2010.

In conclusion, the Premier proudly exclaimed, “Through all the hard work and good negotiations of the Nevis Reformation Party (NRP) led Administration, on 27th May 2010 at the foreclosure proceedings, St. Kitts-Nevis Resort LLC made a successful bid of US$ 86,651,000 for the Four Seasons Resort-Nevis property on [that] Thursday afternoon at the High Court in Charlestown Nevis.” 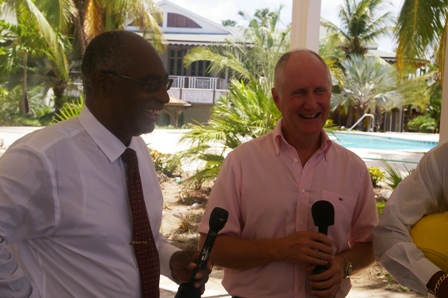 Premier Parry and Mr. Andrew Humphries speaking to media after the tour of Four Seasons Resort