In a symbolic ceremony held at the Bath Plain Barracks on Tuesday morning, Branch Manager of Caribbean Cable Communications – Nevis, Mrs. Trecia Daniel said the donation is worth over $3,000, and is an “incentive to the policemen and women who work hard to fight crime on Nevis.”

Acknowledging the donation on behalf of the Nevis Division was Assistant Commissioner of Police (ACP) Robert Liburd, who thanked the Nevis Island Administration and Caribbean Cable for their gift.

“On behalf of the Police residing at the Bath Plain, Cotton Ground and Butlers Police Barracks, I am pleased to accept this token of support in our united fight against crime,” said ACP Liburd. Also in attendance was Supt. Hilroy Brandy. 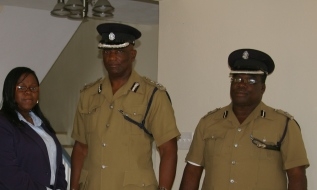 The Nevis Reformation Party (NRP)-led Administration has assisted the Nevis Division in its fight against crime through a number of activities and incentives including donation of police vehicles and building of new police stations and  barracks , thus increasing accommodation for greater police presence on the island.