Prime Minister of St. Kitts-Nevis Dr. the Honourable Denzil Douglas addressing Nevisians at the swearing-in ceremony of ministers of the Nevis Island Administration.

NIA-CHARLESTOWN, NEVIS (July 14TH, 2011) — “My dear people, let us move forward together. Let us move forward committed to doing what is right and what is best for the island of Nevis,” was the challenge issued by Prime Minister [PM] of St. Kitts-Nevis, Dr. the Honourable Denzil Douglas, during Tuesday’s [July 12] swearing-in ceremony for ministers of the Nevis Island Administration [NIA].

PM Douglas’ attendance and participation in the ceremony, he explained, “affirmed that Nevisians could depend on the St. Kitts-Nevis Labour Party-government to do what is right for the people of Nevis and St. Kitts as well.”

Recognising that a hefty number of Nevisians, dressed in the paraphernalia of the opposing Concerned Citizens Movement [CCM], had assembled outside the venue to protest the swearing-in ceremony, PM Douglas welcomed them to the event and congratulated the CCM’s candidates who were victorious on Election Day.

“I want to bring you heartfelt greetings from the Federal Government of St. Kitts-Nevis in general on this very special occasion when we, in our thousands inside and outside of the park, are witnessing the swearing-in of the new Nevis Island Administration.

“I want to commend the people of Nevis, in particular all of the candidates of both parties,” the Prime Minister said.

The federal leader’s speech was, on many occasions, interrupted by the sonorous applause and high pitched cheers of the event’s attendants, who joined him in chanting “hip hip hurrah” as a form of congratulating the newly elected and appointed ministers of government.

“The ordinary men and women” also received high commendation from PM Douglas for what he described as “the calm and stability with which they asserted their rights.” This, he said, proved that “democracy was truly at work here in Nevis and in the Federation of St. Kitts-Nevis generally.”

“I want to commend you also for the orderly manner in which you exercised your franchise.

“Democracy normally, will always yield a majority position and so it was in Nevis yesterday [July 11] or in the early hours of this morning [July 12] because on that historic day, the 11th day of July, the majority of the people voted, yet again, for an NRP government,” PM Douglas said.

“It’s working,” he said, as he reminded Nevisians of his role as the federation’s Prime Minister. 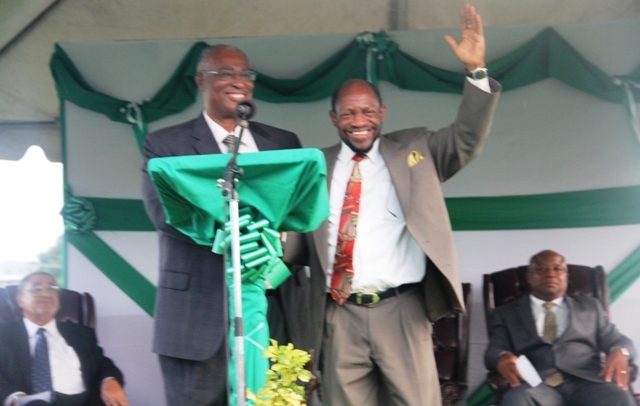 Premier of Nevis the Honourable Joseph Parry and Prime Minister of St. Kitts-Nevis Dr. the Honourable Denzil Douglas shows togetherness at swearing-in ceremony of ministers of the Nevis Island Administration.

“I want to make the point that we must continue to move forward. You have elected a government to look after the interest of the people of Nevis. My duty, as the leader of the Federal Government, is to lend support whenever that support is required,” he explained.