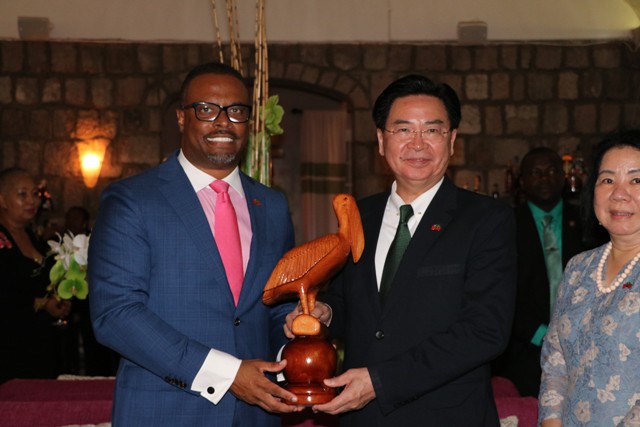 (L-r) Hon. Mark Brantley, Minister of Foreign Affairs and Aviation, and Premier of Nevis presents a gift to Dr. the Hon. Jaushieh Wu, Foreign Affairs Minister of the Republic of China (Taiwan) during his inaugural visit to the Federation, at a reception at the Montpelier Plantation Inn on May 28, 2019 while Mrs. Ru-Yuh Wu looks on

NIA CHARLESTOWN NEVIS (May 29, 2019) — Hon. Mark Brantley, Minister of Foreign Affairs and Aviation, and Premier of Nevis, accompanied by Hon. Alexis Jeffers, Deputy Premier bade farewell to Dr. the Hon. Jaushieh Wu, Foreign Affairs Minister of the Republic of China (Taiwan) and his wife Mrs. Ru-Yuh Wu, as they left the Federation via the Vance W. Amory International Airport, on May 29, 2019, at the end of a historic one-day inaugural visit.

Mr. Wu arrived at the Robert L. Bradshaw International Airport on St. Kitts on May 28th and journeyed to Nevis later that day. In brief remarks at a welcoming ceremony at the KayanJet Longue, the visiting foreign affair minister told Mr. Branley that he was pleased to visit for the first time. He underscored the strong working relationship shared between both countries over the past 35 years.

“Indeed, in the last 35-36 years the relationship between Taiwan and St. Kitts and Nevis have been very strong. We have been working together in all kind of areas – in the area of infrastructure, agriculture, medical attention – in areas like those.

Mr. Wu also thanked the Federation for its support on the world staged, which his government and people are grateful for.

“We are indebted to St. Kitts and Nevis. The reason is because Taiwan is being isolated internationally, and fortunately, we have a very good friend like Minister Brantley and the country like St. Kitts and Nevis who always speak out on behalf of Taiwan.

“As you said Minister Hamilton spoke out in such large volume in Geneva for Taiwan’s role in the World Health Organization and that is highly appreciated by the Taiwanese people, and I would like to express my appreciation on behalf of Taiwan’s people and the government, to your relentless effort in supporting Taiwan’s international participation… We will continue to explore your beautiful country, and we will continue to work together with you to strengthen our bilateral relationship,” he said.

Mr. Brantley used the opportunity to thank the Republic of China (Taiwan) for its unwavering support to St. Kitts and Nevis.

“Taiwan was the first country to recognise St. Kitts and Nevis when we became independent in 1983 on the 19th of September, and that relationship has grown from strength to strength over those years.

While on Nevis the visiting diplomat visited the site earmarked for the Pinney’s Recreational Park, a project to be jointly funded by the Nevis Island Administration and the Republic of China (Taiwan).