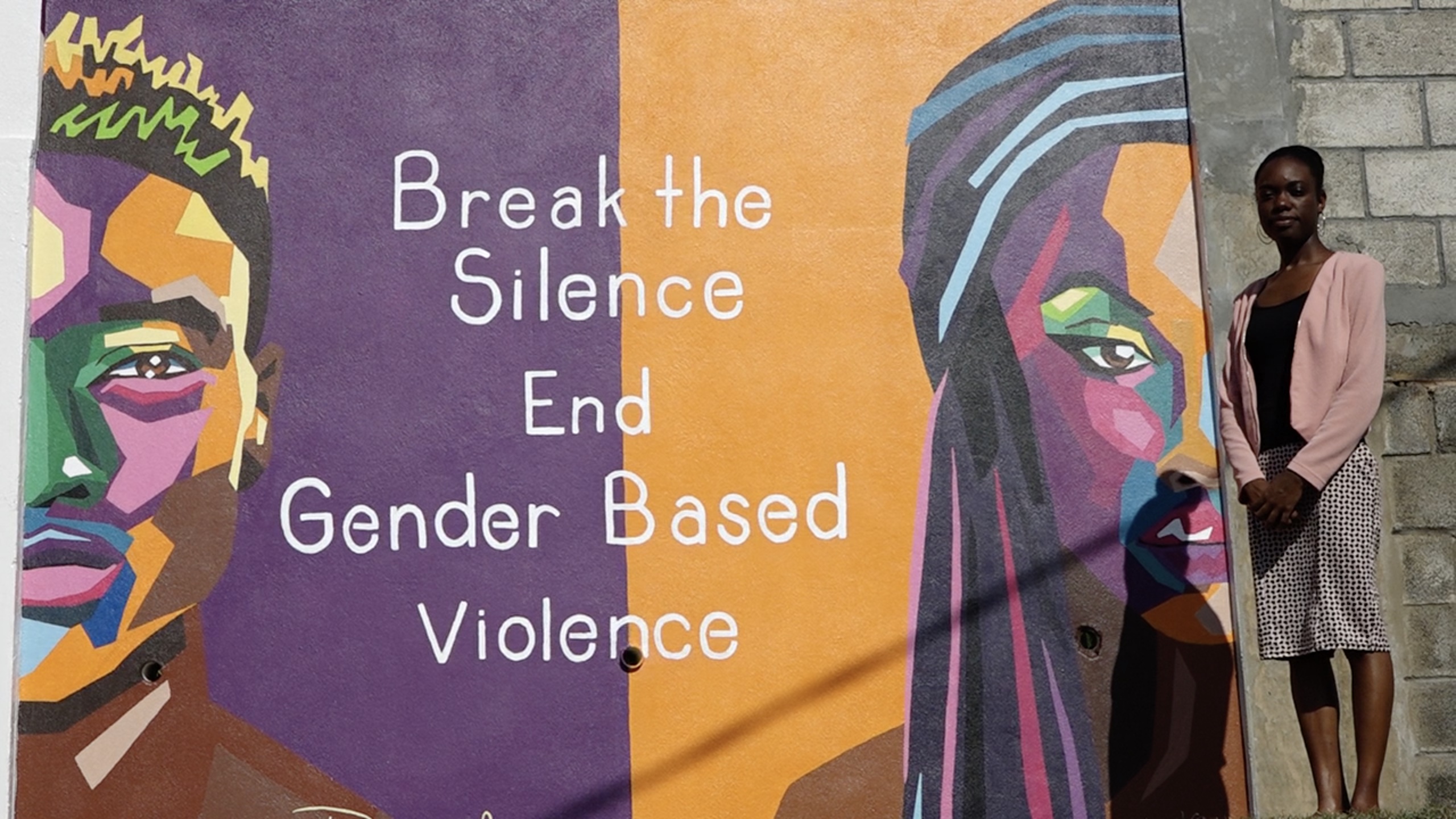 NIA CHARLESTOWN NEVIS (December 07, 2021) — Artist Ms. Danielle Moore says a mural she created for the Department of Gender Affairs, as a permanent reminder of its continued fight against gender-based violence, was done in a style to draw attention to the department’s campaign.

The mural which was painted on the outer walls of the David Freeman Center of Excellence along the Island Main Road in Gingerland, was officially unveiled on November 25, 2021, in line with the observance of “16 Days of Activism against Gender-based Violence,” which runs from November 25, the International Day for the Elimination of Violence against Women to December 10, Human Rights Day.

“The piece that I created depicts both the half a face of a man and a woman and it utilises a lot of colours. Based on the theme “Break the Silence; End Gender Based Violence.” Most of the victims in a number of cases are unable to talk about the difficulties that they are going through, so the reason for creating my piece in this way is to utilise the colours to express the emotion, the distress and the difficulties they are going through in a bold way that will stand out, while at the same time making sure that their message is brought across.

“It utilises the theme colour for the 16 Days of Activism which is orange. The woman is painted on a background of orange. The guy is painted against the background of purple, so both of them are in a setting which would describe what kind of difficulties, struggles, they are going through while at the same time not being able to tell anyone. So that is the reason for creating my piece in this way,” she said.

Ms. Moore is actively engaged in the production of a second mural in the same area in Gingerland which is expected to be unveiled later this month. The first mural which was painted on a water dam in Camps Village at the intersection of the Island Main Road and Camps Road, was done in 2020 by Mr. Vaughn Anslyn.

Ms. Latoya Jeffers, Assistant Secretary in the Ministry of Health and Gender Affairs, was also present and spoke of the campaign.

“The Ministry of Health and Gender Affairs has been on this campaign, 16 Days of Activism against Gender Based Violence. It is usually celebrated on November 25th through the 10th of December, and this year we are celebrating under the theme “Orange the World: End Violence against Women Now!”

“Now, we know that this thing is a taboo and we do not talk about it but our ministry is saying that we have to break the silence. We have to talk about it. We have to end the violence against not only women but against men now!” she said.