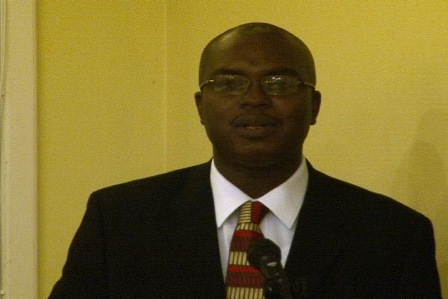 Chairman of the Board of Directors and longest serving Board member of the Nevis Electricity Company Ltd. Mr. Ernie Stapleton

CHARLESTOWN NEVIS (September 09, 2010) — Sustainability remains a critical component for the Nevis Electricity Company Ltd. (NEVLEC), if it is to achieve its goal of sustainable energy production. That view was expressed by the Utility’s Chairman of the Board of Directors Mr. Ernie Stapleton, when he delivered remarks at their 10th anniversary Dinner and Awards Ceremony at Mount Nevis Hotel recently.

He said a solid foundation had already been established for the Company and stability would come from strategic growth and development.

“It comes with good governance, the use and application of appropriate and cost effective technologies, the consistent training, development and exposure of management and staff, the continued collaboration of the company with the shareholder – the Nevis Island Administration (NIA), the customers as well as strategic partners at home and abroad. Without these we will not survive and we will not achieve sustainable energy production,” he said.

The Board Chairman said NEVLEC should not be allowed to return to the earlier days, when the power supply was notoriously unreliable and threatened to affect the island’s investor climate. However, he noted that the Company should only look at the past to learn from mistakes and to resolve to forge ahead to the future.

Mr. Stapleton regarded the Company as one which led the way in renewable energy development and had been successful in its collaboration with the NIA, strategic partners and the developer to bring wind energy production to the people of Nevis. He said next year the company would have another clean and reliable source of power in geothermal.

According to the Chairman of the Board, the goal to become the first utility company in the Caribbean to have 100 percent electricity generated from renewable resources was achievable.

“Our people are being trained in wind and geothermal energy efficiency. Let us remain therefore, steadfast and focussed. Let us therefore, work hand in hand to be a beacon for the Caribbean and indeed the world. We must catch the vision, embrace it let us make it happen. The spark is here the fire is burning let us fan the flames,” he said.

However, on reflection of the current status of electricity and then on Nevis Mr. Stapleton said there had been challenging times in the past with an unreliable system and difficulty with revenue collections.

He thanked the Caribbean Development Bank (CDB) for providing the financing for the project which saw the birth of NEVLEC. After 10 years he said, the company could boast of a reliable supply to the economy and people of Nevis.

The Nevis Electricity Company Ltd. now boasts of well defined job descriptions, polices, role and responsibilities for all sections of operations and management and according to Mr. Stapleton, the most significant was that all key positions in the company were occupied by Nevisians.

“There is a sense of ownership which I believe would only be boosted by offering shares to the employees of NEVLEC sometime in the future but we must ask the question, how did we get here?

“It is my humble opinion it was due to hard work, dedication, sacrifices and cooperation. The Board of Directors and Management worked together. The shareholder, the Nevis Island Administration was involved every step of the way. The people of Nevis, our customers, judged NEVLEC harshly even though they could not appreciate and understand the intricacies of delivering and maintaining a quality and essential service to the population,” he said.

Mr. Stapleton was later in the programme recognised by NEVLEC for his service to the Company as the longest serving Board member. Other members of staff who had worked with NEVLEC since its inception were also honoured.