“This NRP has always been a party of and for the people of Nevis, committed to the development of the island and its residents,” said Premier Parry in an interview with the Department of Information Tuesday afternoon.

He pointed to the many achievements of his NRP-led Administration in the development of infrastructure, agriculture, housing programs for Senior Citizens and education.

“Training and education has been the hallmarks for this Administration and by training people we believe that we have helped with the future development of the country,” commented Hon. Joseph Parry, whose NRP won the July 11, 2011 local elections by a majority of 3-2.

The Premier noted that since taking office in July 2006, young people of all political backgrounds have been invited to receive training and be assisted with university education.

“I am keenly aware that it is not only young people from NRP homes, or CCM homes that have been assisted with education but it is all young people that should be assisted and encouraged, because at the end of the day it is about the development of Nevis ,” the Premier said.

He also said that the island of Nevis must be grateful, and give thanks that the NRP has been the most transparent government in the history of Nevis.

Premier Parry noted that he continues to have open discussions regularly with his one-and –one meetings with the public, his weekly call-in program, and his informing the public of when he travels and what he travels for.

The Hon. Joseph Parry informed the department that when he took the reins of government, the global economy was going through the worst recession since the 1930’s. He also spoke about how he worked assiduously in getting the Four Seasons Resort to stay in Nevis. 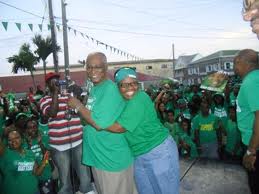 The Hon. Joseph Parry said as the island celebrates the first anniversary of the NRP’s second term in office, he looks to the future with a renewed sense of commitment.

As part of the NRP’s anniversary celebrations, the Premier and his Cabinet will host a public meeting at Brown Pasture by Linda’s Shop on Friday, July 13th at 8pm.