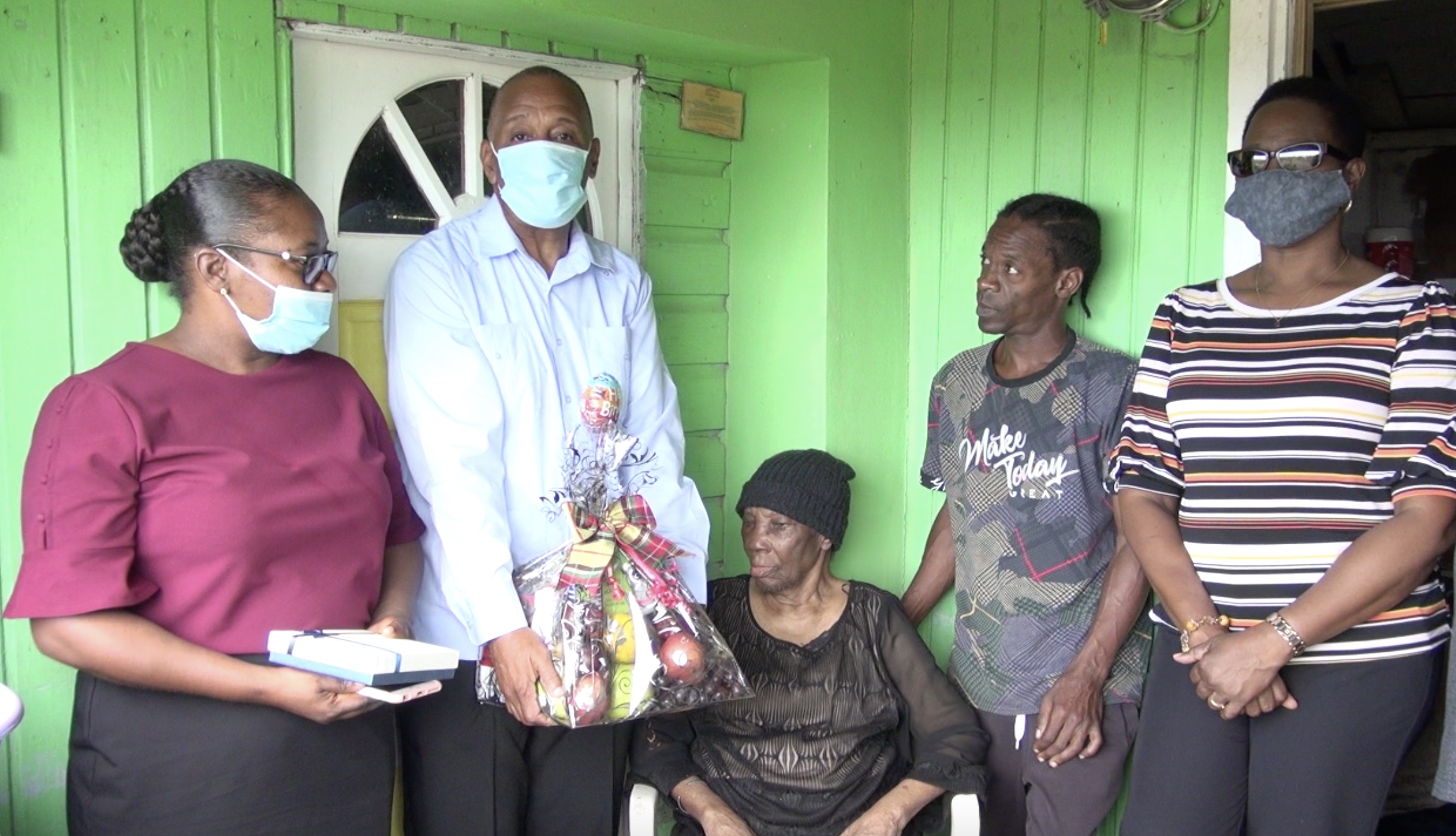 One hundred and one-year-old Eliza “Liza” Jeffers (sitting) with her nephew Randy at her side while Hon. Eric Evelyn, Minister responsible for seniors on Nevis, presents her with a fruit basket, a token of appreciation on behalf of the ministry and the Department of Social Services' Senior Citizens Division in celebration of National Centenarians Day on May 31, 2021

NIA CHARLESTOWN NEVIS (May 31, 2021) — Three centenarians on Nevis were honoured on Monday, May 31, 2021, as St. Kitts and Nevis celebrated National Centenarians Day.

Hon. Eric Evelyn, Minister of Social Development in the Nevis Island Administration (NIA), lead a delegation from the Ministry and the Department of Social Services’ Senior Citizens Division to present tokens of appreciation to Mr. Nathan “Neville” Sutton, 100, of Rawlins in Gingerland; Mrs. Mary Browne, 104, of River Path also in Gingerland; and Mrs. Eliza “Liza” Jeffers, 101, of Hamilton.

In brief remarks Mr. Evelyn lauded the centenarians and called for God’s continued blessings on them. He also thanked their care givers for taking care of them.

The Social Development Minister noted that women would normally dominate those who become centenarians on Nevis and expressed satisfaction that Mr. Sutton has achieved the milestone.

“We were all very proud when Mr. Sutton made his century mark because normally here on the island of Nevis when we hear centenarians, it’s normally female, and over the past couple of years I think probably over 90 percent of our centenarians have been females, and so we are delighted that Mr. Sutton would have made it to the century and it’s just another six or seven months to go before he makes 101,” he said.

The Minister who is also a member of the Federal Government presented the three centenarians with a medal of honour on behalf of His Excellency Sir Tapley Seaton, Governor General of St. Kitts and Nevis inscribed with the words “St. Christopher and Nevis National Centenarians Day, May 31, 2021 honorary.”

Among those present were Mrs. Kim Sing, Acting Director of the Department of Social Services; and Ms. Trudy Prentice, Coordinator at the Senior Citizens Division in the Ministry of Social Development; and Ms. Joyce Moven, a family friend, who accepted the tokens on behalf of Mrs. Mary Browne.