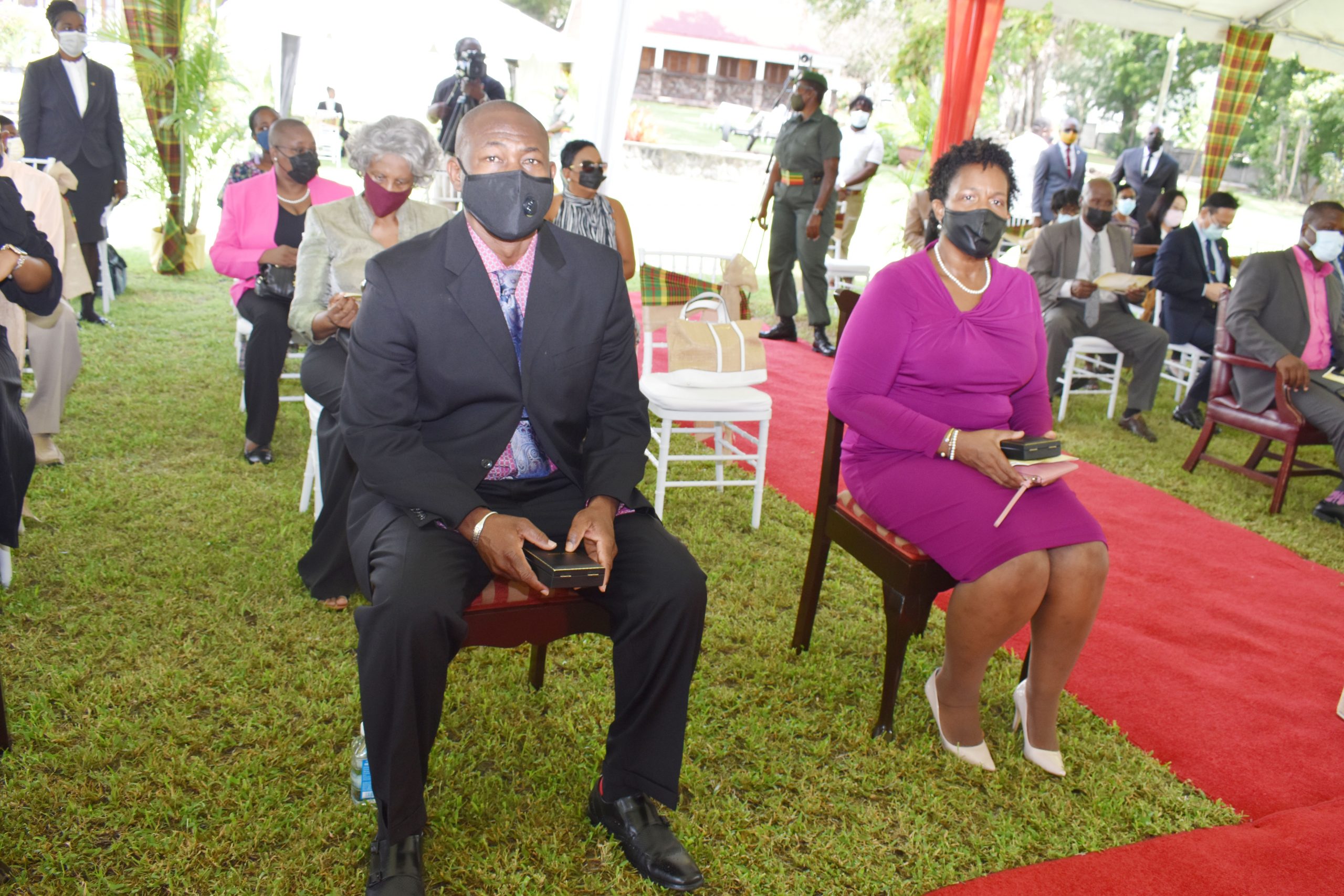 (l-r) Awardees from Nevis Mr. Brian Dyer and Dr. Judy Nisbett, Co-Chair and Chair respectively of the Nevis COVID-19 Task Force at the Investiture Ceremony at Government House in St. Kitts on August 17, 2021

NIA CHARLESTOWN NEVIS (August 18, 2021) — Dr. Judy Nisbett, Chair of the Nevis COVID-19 Task Force; and Mr. Brian Dyer, Co-Chair, were two of the awardees who were presented with the 2020 Medal of Honour for their outstanding contribution to National Service during a Crisis by Sir Tapley Seaton, Governor General of St. Kitts and Nevis. The third awardee Dr. A. Linton Liburd, who was not present at the Investiture Ceremony at Government House in St. Kitts on August 17, 2021, is awarded for his contribution to Medicine.

According to his profile, Mr. Brian Dyer is employed as the Director of the Nevis Disaster Management Department (NDMD). His responsibilities incorporate the principles of comprehensive disaster management: formulating policies, programmes, risk management, and community involvement.

However, though his career path has taken him to disaster management, Mr. Dyer is still an avid aviation enthusiast and continues to work with the federal aviation authorities. He is currently the St. Kitts and Nevis representative on the Board of Directors of the Eastern Caribbean Civil Aviation Authority for the advancement of Civil Aviation in the region.

She received her tertiary education from the Cave Hill and Mona campuses of the University of the West Indies (UWI), and holds a Master of Science Degree in Public Health with a concentration in Infectious Diseases.

Dr. Nisbett’s career path began as a teacher at the Combermere Primary School and on completion of her first degree, she taught Chemistry at CSS and the Nevis Sixth Form College.

However, her lifelong dream of becoming a physician became a reality when she returned to Nevis on completion of her studies. She was employed at the Alexandra Hospital as an emergency room physician and was later assigned to the Department of Public Health as a District Medical Officer and afterwards was promoted to Medical Officer of Health.

Over the years Dr. Nisbett has been exposed to a wide range of training opportunities which have equipped her to be an invaluable member of our health care team in Nevis.

She attributes her love for public health to her mother’s influence as a Public Health Nurse therefore when the world was plunged into the COVID-19 pandemic she sprang into action mobilising the Ministry of Health on Nevis to formulate its response.

Dr. Nisbett clearly recalls the request from the Hon. Premier to chair the COVID-19 Task Force, and to form and lead the response on Nevis. This role she accepted without hesitation and has had no regrets.

She is an integral member of the of the National COVID-19 Task Force and the National Health Emergency Operations Centre and says she is proud to be a part of a strong team which is skilfully and successfully managing the response.

The senior medical officer considers it an hour to lead Nevis’ Health Emergency Operations Centre and lauds the formidable contribution and combined efforts of the group.

She thanks God constantly for enabling her to be able to serve and to live out her country’s motto “Country Above Self.”

“I want again to give them a special hand. Not only have they made a name for themselves in terms of their contribution in the fight against COVID but wherever there is a disaster or an eminent one, these personalities and others will always be there to take us through.

“So we owe you both and we owe all who work with you and support you a great deal and debt of gratitude,” he said.

The third Nevisian, Dr. A. Linton Liburd, will be invested with a Medal of Honour at a ceremony to be hosted by Her Honour Hyleeta Liburd, Deputy Governor General on Nevis, for his contribution in the field of Medicine.

Also present at the ceremony were Her Honour Hyleeta Liburd, Deputy Governor General on Nevis; Hon. Michael Perkins, Speaker of the St. Kitts and Nevis National Assembly, and other members of the Government of St. Kitts and Nevis.