The presentations which took place at the Department of Education at Marion Heights were made to Principal of the Violet O. Jeffers Nicholls Primary School Mrs. Ermileta Elliott and Teacher Librarian at the Gingerland Secondary School Ms. Londa Browne. A representative for the St James Primary School was not immediately available to receive the gift.

“It is important for us to upgrade the physical facilities, provide equipment, technology and information resources in all media formats.

“Through our school libraries, our students as well as staff must be exposed to modern tools and features in keeping with international standards and best practices for school libraries. Our school libraries must, therefore, be provided with the appropriate technology, hardware and software,” she said. 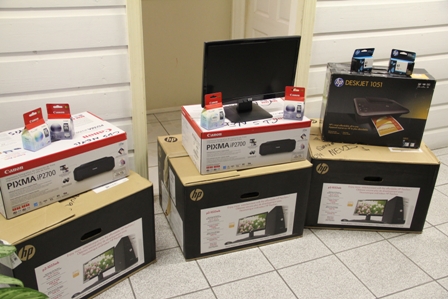 Mrs. Daniel referred to the presentation as a step in the right direction and explained that the Library Services was able to provide the school libraries with the computers, printers and extra ink as a result of fund raising activities in 2011.

“[It] forms part of an initiative by the NLS to ensure that our school libraries have the necessary tools to provide access to the information matter in data bases on the internet or on other information media.

“Our Teacher Librarians are required to create learning environments in their school libraries, that will enable and empower students at their schools to acquire and use information that helps them with school work and also help them understand their world and experiences can eventually generate new information and knowledge,” she said

According to the Library Services Director, it was important for Teacher Librarians to impart information literacy skills that would help their students identify, acquire and organise information from different sources and also to analyse and make judgments about information collected. 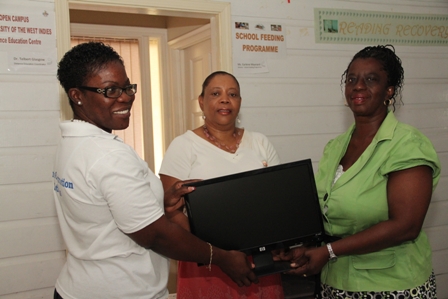 Those skills were necessary for student life, she noted, as well as the world of work. With the computers available at the school libraries they would enable the Teacher Librarians to contribute to the transformation of the education system to make it more student-focused.

In addition the NLS Director explained that the computers would help to facilitate the efficient and effective management of the operations at the school libraries.

Mrs. Daniel said the NLS was proactive and therefore had found ways to support the Nevis Island Administration’s Budget in the tough economic times.

“Our school libraries need financial resources to remain current and relevant to the needs of the education system and it is for that reason we attempted to raise some funds during the International School Libraries Month in October. It is the proceeds of these activities which have enabled us to acquire those computers,” she explained.

Mrs. Daniel commended Teacher Librarians and staff of the NLS for their demonstration of initiative and team work during the fund raising activities and told them she was certain the computers would have a far reaching and positive impact on teaching and learning in the school libraries on Nevis and by extension in the education system. 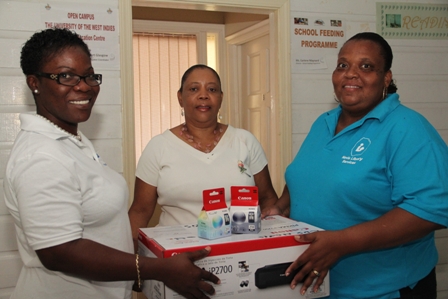 She used the opportunity to express gratitude to other partners including students, class room teachers, principals, businesses, government departments and Non Governmental Organisations (NGO) among them Nevisian organisations in the United States of America for their support, citing it was a good example of private sector and NGO partnerships.

The Director also issued an invitation to other companies and agencies on Nevis and in the Federation, to partner with the NLS in 2012 to continue the development thrust in the school libraries. “An investment in the future workforce in their organisations,” she said.

Also present at the handing over was Project Officer for School Libraries on Nevis Mrs. Marva Roberts.