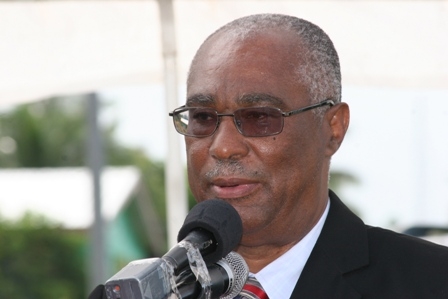 Premier of Nevis, the Hon. Joseph Parry
CHARLESTOWN, NEVIS (Thursday, March 1,  2012)–Premier of Nevis, the Hon. Joseph Parry is advising Nevisians at home and abroad, and residents, to be keen listeners to both the political parties on the island, the ruling Nevis Reformation Party (NRP), and the opposition Concerned Citizens Movement (CCM), as that is the only way they will be able to deduce which of the two parties is transparent in its dealing with the people.
“I want to talk about transparency, because it is something that the opposition has accused the government of, because this government entered the arena on the wings of transparency,” said the Premier on Tuesday, February 28 on his weekly radio programme, In Touch With the Premier, hosted by Press Secretary Ms. Deli Caines, and aired live on Choice 105.3 FM and other radio stations in the Federation.

According to the Premier, when it comes to developmental issues that would impact on the people, his administration has sought to inform them at every step of the way, but it appears that it has worked to its disadvantage. He explained that every time “we say we are going to do something, there is a big furore about it, and people are told all kinds of negative things.”

He told his listeners that people have been told negative things about the Amman Hotel Project, which is earmarked to come on stream in the St. George’s parish, the Brown Hill Communications, the Namdar Project in Charlestown, and most recently on community centres and the fisheries project slated for Charlestown.

“It is sad that some people don’t listen to our programme (In Touch With the Premier), the majority of people do, but all don’t,” said the Premier. “Those who do not listen only hear one side, and that is the difficulty of being transparent, because when you are transparent and another side tries to spin and you only listen to the other side, you cannot even weigh what both sides are saying and come to a conclusion.”

He told listeners that if transparency is going to work, “everybody has to learn to listen and make up their minds”. He observed that one could not just hear one side and claim to have all the knowledge, as by doing so one faced the danger of being swayed, being confused and easily manipulated.

“My point of view is that listen to everybody,” advised the Premier. “We have claimed that we have this high level of literacy, listen to everybody. Transparency is discussing with the people when you do things and bring the people in, you seek their opinion, they are part of  it, and if anything goes wrong, people know.”

Addressing the fisheries project that is to come on stream at Gallows Bay in Charlestown, Premier Parry pointed out that both political parties were involved in the project, and both are claiming that they have been transparent. He, however, questioned how many people were consulted when the CCM first handled the project that the Japanese were offering EC$22m to put up.

The record will show that when the Japanese were negotiating with the CCM-led Nevis Island Administration, members of the Greenpeace Movement, which is hostile towards the Japanese because of its stand on whaling for scientific research, landed on the beach outside the Marriott Resort in St. Kitts in June 2006 to protest against Japan. The International Whaling Commission was holding its annual general meeting at the Marriott.

The protestors were arrested for having waved cardboard markers (placards) that were brought into the country straight from the group’s vessel, Arctic Sunrise, which is a Customs violation. Despite the protest, Japan got a one-vote majority on a non-binding resolution in favour of eventual resumption of commercial whaling. While in the Federation, Greenpeace members were allowed into Nevis schools where they talked against the Japan-funded fisheries project on Nevis.

Premier Parry is of the opinion that CCM’s current pronouncements that the project should be sited at Newcastle do not make economic sense. He said trucking fish from New Castle to Charlestown and to a central selling area would only make the fish expensive to the consumer. After consulting with members of the public, the government has determined that Gallows Bay is the best venue for the project and its construction will start shortly.