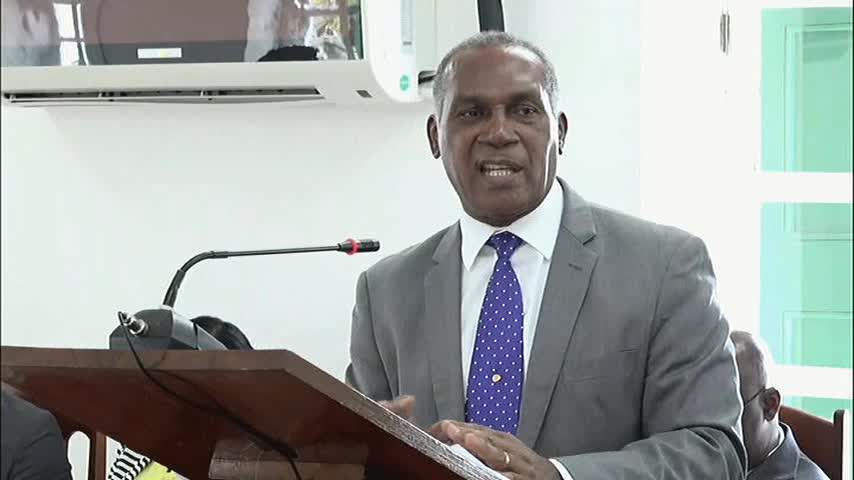 Hon. Vance Amory, Premier of Nevis and Minister of Finance in the Nevis Island Administration making his presentation at a sitting of the Nevis Island Assembly on July 20, 2017
NIA CHARLESTOWN NEVIS (JULY 21, 2017) — Two bills in the name of Hon. Vance Amory, Premier of Nevis and Minister of Finance, were passed at a sitting of the Nevis Island Assembly on July 20, 2017, after receiving their second and third readings.
Both, the Nevis Business Corporation Ordinance, 2017 and the Nevis Supplementary Appropriation (2016) Ordinance, 2017, were among four bills tabled in an earlier sitting of the Assembly on July 06, 2017.
The Nevis Supplementary Appropriation (2016) Ordinance, 2017, sanctions further payment from the Nevis Island Consolidated Fund, in excess of the amounts placed on the Estimates for the year ending December 31, 2016.
The Nevis Business Corporation Ordinance 2017, which was passed unopposed, will enhance the operations of the Nevis Financial Service Industry. It repeals and replaces the Nevis Business Corporation Ordinance Cap 7.01 (N) as amended.
It also provides for the establishment of international business corporations on Nevis and for associated matters incidental or consequential.
Shortly before the Nevis Business Corporation Ordinance 2017 bill was passed, Mr. Amory, noted that as a jurisdiction, Nevis must be a part of adjustments as they emerge in the international financial market place.
“We need to be part of the adjustments which take place, so that we do not appear to be in contravention of the common reporting standards, nor of seeking to provide a jurisdiction which does not meet the international standards. I think it’s important that we make that note here in this parliament,” he said.
Mr. Amory, stated that the Financial Services Sector is an important source of the Nevis Island Administration’s revenue and the modernisation of the legislation coupled with the second bill passed, would enable the Administration to generate additional business and an opportunity to generate additional revenue.
He said the discussions on the bill were done in good faith and thanked both sides of the Assembly for their support.
Mr. Amory, described the preparation as a long and demanding undertaking for a piece of legislation, which is believed, can stand the test of time. He also thanked the staff of the Ministry of Finance and the Legal Department who put together the bill for parliament.