The donation was handed over to Advisor to the Minister of Health on Nevis Mr. Hensley Daniel on November 21st, 2012 at the Hospital grounds by President of the St. Kitts Club Mr. Earl Kelly.

During the presentation Mr. Kelly explained that his Club was pleased to do so and would continue to serve the people of St. Kitts and Nevis.

“We want to hand over these supplies to the Alexandra Hospital and we are very pleased to do that. We will continue to work in the interest of the communities of St. Kitts and Nevis. That is what Rotary does, we serve and will continue to serve to the best of our ability,” he said.

According to St. Kitts Rotary Club President, his organisation did not have much funds and as such, whatever donations it received from clubs elsewhere they would be happy to accept them for the people of the Federation and continue to donate. 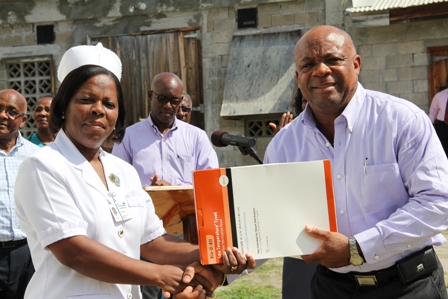 Mr. Kelly also explained that the St. Kitts Rotary Club had been working with the Hackettstown Club for the past nine years and during that time they had donated substantially including two ambulances, a school bus and several pieces of hospital equipment.

In the last few weeks his organisation received a 40ft. container through an initiative of the New Jersey based Club and decided that in the interest of sharing would distribute those supplies between the J N France Hospital in St. Kitts and the Alexandra Hospital in Nevis.

He described the contribution as substantial and spoke to some of the things included in the gift for Nevis.

“The supplies include one photo copier, four chairs and miscellaneous hospital supplies. We also have included in the package two treadmills, 12 hospital beds and another bassinette. This is a very substantial donation and we are very, very pleased to make that donation on behalf of the Hackettstown Club,” he said.

Also in the shipment Mr. Kelly noted, were 40 firemen suits which was donated by a municipality close to Hackettstown in New Jersey. They were cleaned up and handed over to the Fire Department in St. Kitts sometime last week.

In response Mr. Daniel expressed sincere gratitude and appreciation to the service clubs and regarded the gift as a very important contribution to the development of health services on Nevis. 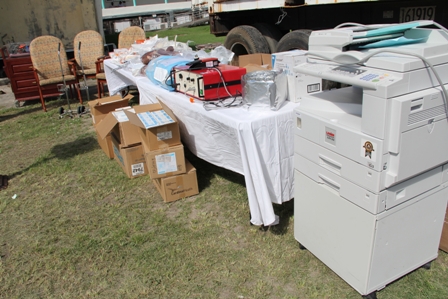 On receipt of the gift, Nurse Dias assured the donors that the medical supplies and equipment would be put to good use and that the patients at the health facility would be the benefactors of all the supplies. She also thanked the organisations for their worthwhile gesture.

“A special thanks to the Rotary Club of St. Kitts and Nevis and we ask that you take back our kind gratitude to the Hackettstown Club and we look forward for continued partnership with them,” she said.

Also present were members of the Rotary Club of St. St. Kitts, Acting Hospital Administrator Ms. Grace Elliott, and other Hospital staff while the ceremony was chaired by Permanent Secretary in the Ministry of Health Ms. Angelica Elliott.