They were handed over by Deputy Public Affairs Officer at the Embassy of the United States to Barbados and the Eastern Caribbean Ms. Rachel Zaspel in a brief but significant handing over ceremony on January 24, 2012 at the Ministry of Finance’s conference room in Charlestown.

Accepting the books, Mr. Daniel said as he welcomed the partnership between the Embassy and the Nevis Island Administration (NIA) on the critical issue of domestic abuse the gift would help in the fight to rid the island of the scourge as it related to domestic violence in the society.

He noted that the issue was endemic in the society and was often treated as acceptable and accepted and as such the society, in some aspects, had learnt to adjust to that injustice. He added that in some respects many persons had been able to house the oppression which came with domestic violence.

“Certainly if we could share the information and ways to deal with it, first of all ways to recognise it and ways to address it, we certainly will be on the path where we can rid the society of this negative aspect.

“The Department of Social and Gender Affairs is minded to address this matter on a regular basis. In some instances the work of the Division has been made very difficult because it has to do with removing persons who are the subject of domestic violence and providing alternatives for them,” Mr. Daniel said. 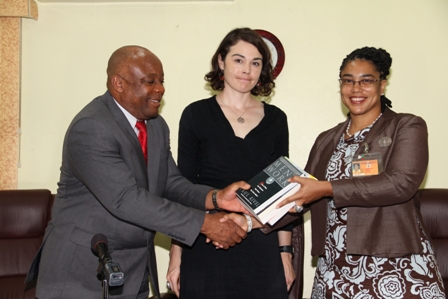 The Social Development Minister used the opportunity to remind all that social problems like domestic abuse weighed heavily on the financial burdens of the country, especially in a difficult economic environment. He said if the society was purged from domestic violence, much of the Administration’s resources would be directed at other important areas.

The Minister also disclosed that he was hopeful, in time, that an Information Unit on the troubling issue would b

e set up within the Ministry outfitted with books like those donated by the Embassy.

He said the books were but a small contribution to the Administration’s efforts in nudging the society towards a more egalitarian approach in dealing with social relations and welcomed the partnership.

“Our Government is minded that we have to work with the partners whether they be UNIFEM (now UNWoman), UNICEF or with the US Embassy. We welcome the partnership because we recognise that we have to address this matter with the help of several agencies and institutions.
“In that regard therefore, I want to commend the effort and recommend to the Department of Social and Gender Affairs that we continue to keep it on the agenda. It must become the subject for continued discussion and debate so that we arrive at a point where we can see its ugly head no more,” he said.

Meantime, Ms. Zaspel who is also responsible for Education and Cultural Outreach at the Embassy said, the gift was part of the Embassy’s continued work with its local and regional partners to combat domestic violence in the Eastern Caribbean.

She pointed to a prior programme in which experts on Domestic Violence Prevention had visited the island in 2011 for a consultation courtesy the US Embassy and noted that the books was another step in the fight against the social ill. 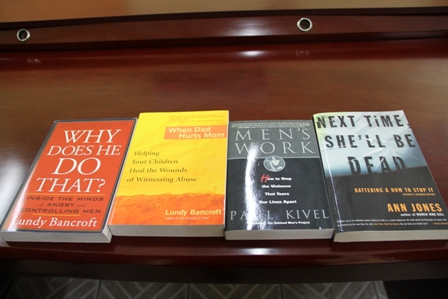 Since then Ms. Zaspel explained that the Embassy had been consulting with other colleagues, Embassies, High Commissions and the United Nations Children’s Fund (UNICEF) on collective efforts in the same matter across the region.

“We are looking for ways to implement nation’s action plans and to support the implementation of multiple disciplinary sexual assaults response teams, an approach we can all agree, can offer not only holistic assistance to survivors but one that can reduce occurring violence.

“We do this because we believe that the issue of domestic violence whether it is aimed at men, women or children, is a critical issue that affects all aspects of society and it directly impacts an estimated one in three women,” Ms. Zaspel said.

She quoted Secretary Clinton as saying that domestic violence not only harmed the victims and their families but also shredded the fabric that weaved everyone together as human beings.

In conclusion, the US Embassy Official thanked all those on Nevis for their continued work in the field of domestic violence. She said she looked forward to continued corporation and one day the end of all the violence

“Towards that goal, I am pleased in presenting these books on domestic violence and I hope that this one more small step is moving in the right direction to make our world a safer place,” Ms. Zaspel said as she handed over the books to Minister Daniel. 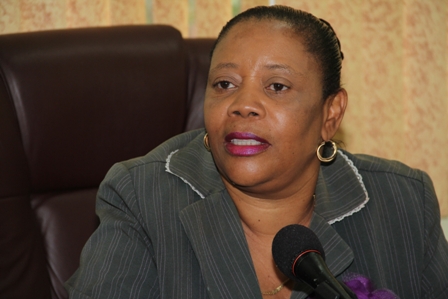 Family Services Supervisor/Counsellor Social Services Department on Nevis Mrs. Halima Gresham was also on hand for the handing over. In a brief comment on behalf of the Family Services Division, she explained that the Division was responsible for child safety and thought it important for persons to be educated on the fact that when abuse occurred in the home, it not only affected the parents but also the children who wore the scars.

“We want our wonderful island of Nevis to be violence free. We want to encourage families to work together to protect their children [and] to make sure that we eradicate sexual abuse and violence in all of its forms. We thank you so much for assisting us in our endeavours,” she said.

Also present was Director of the Nevis Library Service Mrs. Sonita Daniel who chaired the function.

Earlier that day the US Embassy Official also presented a number of books to the Ivor Walters Primary School Library in Prospect.