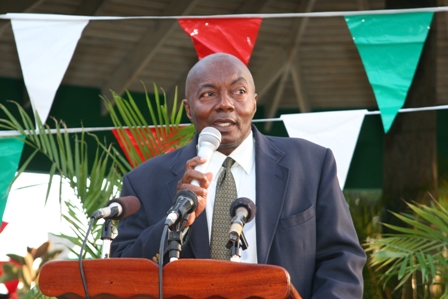 General Manager of West Indies Power Nevis Ltd. (WIP) M. Rawlinson Isaac, said that the company had every intention to fulfill its promise to the Nevis Island Administration (NIA) and the people of Nevis, to provide cheaper sustainable energy.  He praised Premier of Nevis Hon. Joseph Parry for his foresight to allow geothermal explorations to commence on the island.

He made the remark while he officially handed over a gazebo/bus stand at the Five Turnings in Cotton Ground Village to Premier of Nevis and Area Representative Hon. Joseph Parry, at a ceremony on August 08, 2008.

“Our [WIP] intention and we have promised the Premier that we will provide this country with cheap and sustainable electricity, no outages whatsoever. Don’t worry [when] you hear people talking all kinds of nonsense, the resource is here, we are here to extract it to develop that resource, to operate and to produce electricity. There is no mystery about it, it happens all over the world. Iceland is doing it for almost 100 years; Italy, the United States provides about 2,000 mega watts; Russia, China, Indonesia, the Philippines, Turkey, Taiwan [and] in the Caribbean we have Guadeloupe. So we are saying that we have a tremendous power base here and that we have to extract it for our own utility.

“I want you [Nevisians] to commend and to give really top cheers to the Premier because when we [WIP] approached him about geothermal, although it has been around for quite some time, he had the vision and not only the vision, he also had the courage – because I would imagine all those times people talking about volcano and earthquake if you attempt to drill – to stand up to all those concerns and to give West Indies Power the license to explore,” he said.

Mr. Isaac said when Premier Parry was approached by WIP, he was told that exploratory works would not cost the government any money. The Company subsequently brought to the table persons with the financial resources, skill and competence to see the project through and to make Nevis proud.

“Nevis will be very, very proud in a matter of one year and about three months, to be the first country in the Organisation of Eastern Caribbean States (OECS) to boast of geothermal energy. It is no light feat I must tell you that. 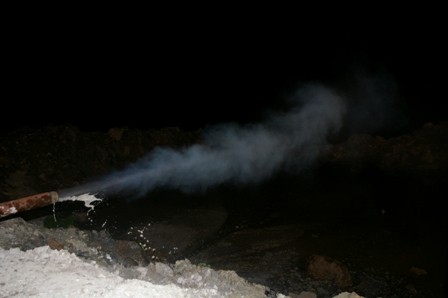 “We are also having negotiations with the St. Kitts government as well because we believe we have enough [energy] to supply them on the other side of the Narrows&I want you to bear with us, to bear with the government, listen to the radio, get the information, read in terms of what is happening because I am here to advise you that geothermal is indeed the way forward,” he said.

The WIP General Manager also noted that work continued to be on schedule and construction of the geothermal plant was planned for October and would provide some “good and high paying” job opportunities  which he urged Nevisians to prepare for.

Mr. Isaac noted that the drill hole at Nevis Site1at Spring Hill had produced 150mega watts of power which had been capped. Nevis utilizes about 10 mega watts. Drilling continues at Nevis Site 2 in Upper Jessups Village and as of Friday August 08 they had gotten 250 degrees out of a depth of about 1800 feet

According to the General Manager, a study was done sometime in 1999 and a report from the United States Department of Energy stated that the Caribbean had about 10,000 mega watts of geothermal power. Nevis contributed about 900 and so West Indies Power decided do something about relieving the energy plight of the island.

Meantime, with regard to the gazebo/bust stand, the WIP General Manager said the company decide to finance the over $80,000 project after the Chief Executive Officer Mr. Kerry Mc Donald saw students waiting for the school bus getting wet and decided that the company, whose office is based in the area, should so something to rectify the situation.

He said they approached the NIA who accepted their proposal to finance the gift for the residents of Cotton Ground and other members of the public.

While he officially handed over the gazebo/bus stand Mr. Isaac welcomed all to use the facility.

“I will say it has a very, very large key , it is so large that we cannot get the door closed so I will tell you it will remain open and it is open for all the people of this area and anybody who wish to us it,” he said.