CUOPM-CHARLESTOWN  NEVIS (JANUARY 17th 2011) – The working relationship between the Federal Government headed by St. Kitts and Nevis Prime Minister Hon. Dr. Denzil L. Douglas and the Nevis Island Administration (NIA) led by the Premier of Nevis, the Hon. Joseph Parry is being credited for the significant strides in the social, economical and developmental of the island of Nevis.

Invited to raise a toast to Premier Parry, who Nevisians have dubbed “The Miracle Man,” Prime Minister Douglas noted that he has been in office for the last 16 years “there has been in the last nearly five years a particular relationship that I  had never experience before as Prime Minister of the Federation of St. Kitts and Nevis. I say it really from my heart. I do not intend to get involved in the local politics, but I must express myself truthfully as I do, at all times.”

Dr. Douglas emphasised that “under leadership of Joseph Parry, unlike (previously) where there had been on occasion’s uncertainty, where there might have been strife and division, under his leadership, there is definitely a positive feeling for the future.” 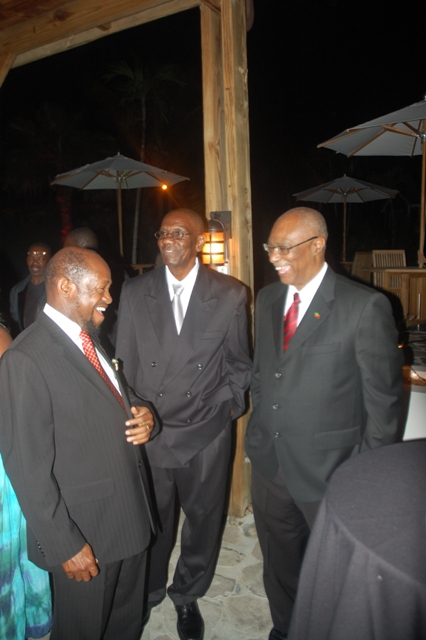 “Harmony and unity are terms which I would like to describe the relationship that exists today between the Nevis Island Administration and the Federal government,” said Dr. Douglas to the thunderous applause of the large gathering at the Four Seasons Ballroom, which included Deputy Governor General of Nevis, His Honour Mr. Eustace John and Mrs. John; Deputy Prime Minister of St. Kitts and Nevis, Hon. Sam Condor and Mrs. Condor; Attorney General Hon. Patrice Nisbett; Federal Minister of Health, Hon. Marcella Liburd; Deputy Premier of Nevis, Hon. Hensley Daniel and Mrs. Daniel; Ministers of the Nevis Island Administration; Speaker of the St. Kitts and Nevis National Assembly, Hon. Curtis Martin and Mrs. Martin; President of the Nevis Island Assembly, Mrs. Margorie Morton and Ambassador of the Republic of China on Taiwan, His Excellency Miguel Li-Jey Tsao.

“Tonight, I end this toast by saying, that I pray to the Almighty God that Joseph Parry will continue to have His blessings, will continue to have strength, health, the capacity and finally the support of the people of Nevis to continue on the path of economic and social development that we are experiencing today in St. Kitts and Nevis,” concluded the Prime Minister of St. Kitts and Nevis. 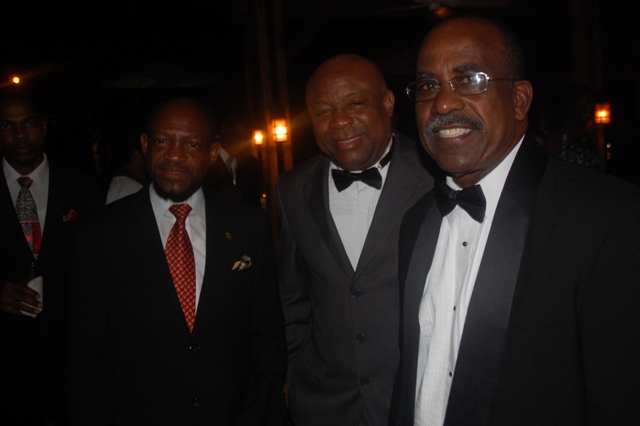 Former five-term United States Virgin Islands Senator, Nevisian-born the Hon. Roosevelt David in his keynote address, also referred to the relationship between the current leaders of the Federal Government and the Nevis Island Administration.

“The relationship that has been fostered by the Honourable Dr. Denzil Douglas and the Hon. Joseph Parry, has created an indomitable team that is on its way to building a legacy of exponential magnitude; this Nation will never be the same,” said Sen. David.

In his response, the Premier of Nevis, Hon. Joseph Parry said the days of First National Hero, The Right Excellent Sir Robert L. Bradshaw and the St. Kitts-Nevis Labour Party are not the days him and Dr Douglas.

“They were not our days and our experiences and the changes in the Caribbean and in the world, have dictated that we need to get on. The movements with China, America, Britain, France, Germany and even Russia, indicates that if former bitter enemies can work together, why can’t we?” asked Premier Parry.

He said that no one should be allowed to make an issue of the relationship between Prime Minister Dr. Denzil Douglas and himself, as the Premier of Nevis.

“We are both working for the development of St. Kitts and Nevis. We have done great things together and there are many great things for us to do. Those who wish to go backward, those who wish to talk about the past, they can do so, but if you were to check their records, you will find out, when (past leaders) were fighting secession, you could not find them.

“You will find out that we were never fighting for the independence of Nevis, we were fighting to go back to Britain and thank God we did not succeed, because we would of have the problem that Anguilla has today. Do you know that today, we have more power in Nevis than Anguilla has in Anguilla?” asked Premier Parry.