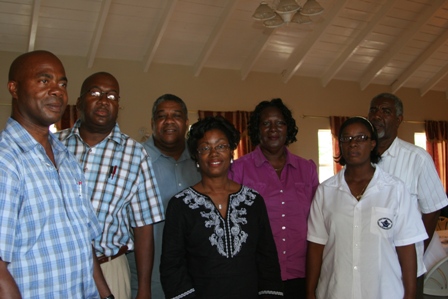 President of the St. Kitts Principals Association Mr. Anthony Wiltshire (extreme left) with other Executive members of the organisation

CHARLESTOWN NEVIS (May 07, 2010) — President of the St. Kitts Teachers Association Mr. Anthony Wilshire, described a one day work shop of the Federation’s Principals on Nevis, as a necessary but scarce opportunity to rekindle and strengthen the educational flame. He made the comment when he addressed participants at the opening ceremony at the Red Cross Conference Room in Charlestown on Friday.

“Bringing principals together from both islands is definitely a step in the right direction, as we strive to inculcate common practices, to synchronise our ideas [and] to solve particular problems.

“There must not be any dissenting voices as we continue the herculean task of leading our respective school. We are the premier nation builders [and] we are in that unique position of either making or breaking our nation. In fact, we have a tripartite role – children, parents, teachers [and] ministry. We impact every strata of society,” he said.

Mr. Wiltshire referred to the workshop’s theme “Principals Uniting for Education Advancement”, as one carefully selected. He noted that as author Henry Adams said “A teacher affects eternity; no one can tell where his influence stops.” Consequently, they had to empower themselves to ensure that they were not only today’s leaders but were equipped for a challenging tomorrow.

He said the task hung around their necks like the sword of Damocles and it was imperative that such workshops were provided to re kindle, re ignite or strengthen the educational flame. 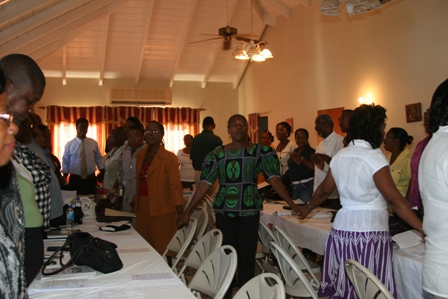 He said too that the workshop would help to realise the Association’s stated objectives in its Mission Statement which were: “To foster unity and professional growth and enhance the psychological, physical and financial welfare of all its members. Also, to provide a medium to improve educational leadership and education in all schools so as to ensure that our students are able to compete in the global market.”

The first session of the workshop was entitled “Implementing and Monitoring the White Paper Initiatives: The Critical Role of principles”, which he said would help to build the necessary confidence the Principles required, to implement various aspects of the critical tool which was often referred to as the Educational Bible.

Session two encompassed School Improvement Plans 2010/2011; Principal Evaluation and Career Path. Mr. Wiltshire said those topics were fundamental to the successful development of the islands learning institutions and because accountability and transparency were demanded more than ever he believed they were on the right track.