Deputy Premier of Nevis and Minister of Youth and Sports on Nevis Hon. Mark Brantley presents trophy to young Charlestown triathlete Romel Gaskin, after he arrived 4th at the finish line. He was the first Nevisian to finish the MaccaX Nevis International Triathlon on November 16, 2013

Deputy Premier of Nevis and Minister responsible for Youth and Sports Hon. Mark Brantley, who was present at the historic event, congratulated the Charlestown youngster from Crosses Alley on his performance.
“As Minister with responsibility for Sports Romel, I want to congratulate you. I think we need to see more local people doing this race.
“I didn’t know you were a triathlete so it’s good and to place fourth behind the likes of Macca McCormack I think it’s fantastic. So congratulations again and I hope to see you next year, I am told its going to be even bigger and better,” he said.
In response to his performance, Mr. Gaskin explained that he never thought he would have placed so close to top triathlete Chris McCormack who won the event.
“It wasn’t as bad as I thought. I thought I would have taken like a whole five to six hours but the competitive side came over me, I am thankful, so I got to push a little harder than what I actually trained with.
“I came in 4th so I am really happy about this. I thought that I had come in last but I am thankful to all the supporters; the other supporters who support the other people that just came in because that would encourage them to come in also and I just would like to thank everybody,” he said.
Regarding his plans for the second MaccaX Nevis International Triathlon Mr. Gaskin said he would participate again. 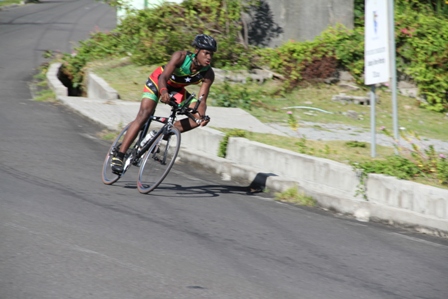 “Yes, I would do it again and try to place higher once I train harder and have enough time to train because that was my main thing. I did not have enough time so whenever I had time that’s when I trained,” he said.
The first MaccaX Nevis International Triathlon was a collaborative effort among the Nevis Tourism Authority, the St. Kitts and Nevis Triathlon Federation and decorated Triathlete Mr. Chris “Macca” McCormack.
The race which was named after Mr. McCormack attracted more than 60 entrants from around the world who competed in a 1.5K swim at Gallows Bay followed by a twice-round-the-island 60k cycle event and a 10K run through Charlestown, Bath Village through Gallows Bay and ended near the Charlestown Pier.