CHARLESTOWN NEVIS (November 9, 2010) — Youths from across the region took over Nevis last week Monday [Nov. 1] when they participated in a number of community service projects. The projects ranged from reading in schools and visiting the elderly to planting trees and signs at schools and along the roadside.

The participants, who represented their respective countries at the Rotary Youth Leadership Awards [RYLA] Conference from October 29th to November 1st on St. Kitts, upon their arrival into Nevis, were divided into groups by Club Service Director of the Rotary Club of Nevis, Mr. Dexter Bowrin.

In a brief interview with the Department of Information [DOI] following the morning projects, Mr. Bowrin said that he was “heartened by the activities” that had taken place, adding that he was pleased with the level of participation and effort displayed by the youths. 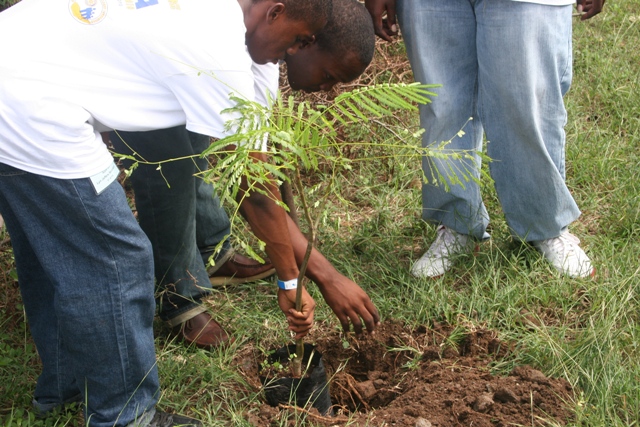 President of the Rotary Club of Nevis, Ms. Carlyn Lawrence also recorded her satisfaction with the day’s activities, adding that the participants were “young and energetic and enjoyed what had taken place.”

In speaking about the upcoming plans for her club, Ms. Lawrence said that a number of projects, including diabetic programmes; the club’s annual Spelling Bee; a Christmas lunch and gift giving exercise and reading in schools, had been planned for the July 1st to June 30th Rotary year.

Representatives from the federation of St. Kitts-Nevis, Mr. Romaine Mills and Miss Shelisia Glasford also expressed their satisfaction with the one day activities.

The participants, aged 16 to 25 years, read to students at the Joycelyn Liburd and Elizabeth Pemberton Primary Schools, made a donation to the Flamboyant Nursing Home which is located on the grounds of the Alexandra Hospital, posted Rotary signs in the Newcastle area and along the Pinney’s By-pass Road and planted trees at the Bellevue International and Violet O. Jeffers Nicholls Primary Schools.

While the conference was held at the International University of Nursing [IUON] on St. Kitts and was specifically geared towards attracting the participation of members of Rotary’s District 7030, a handful of participants from District 7020 attended the conference. 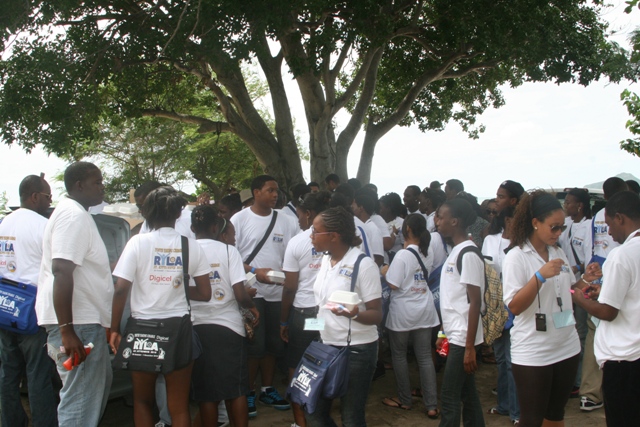 Assistant Governor for District 7020, Mr. James Ferres, told the Department of Information that he was pleased with the overall leadership awards conference and added that the participants would be expected to “go back to their communities and start working on these projects which they had implemented.”

“It’s been a very eye-opening event for some of the youngsters who are here for the very first time and also for some of us who are older Rotarians to hear that these young people can come up with some great ideas and different things, different projects which they would like to see implemented in the Rotary area such as in St. Kitts and in Nevis.

“I think it will be an eye-opener for the whole community that these youngsters can make a definite change in our society,” Mr. Ferres highlighted.

Representative from Barbados, Mr. vonRad Walters described RYLA 2010 as “an experience with a difference.” According to Mr. Walters, the young leaders from across the Caribbean who attended the leadership awards conference “had one thing in common and that is to take charge; to be agitators, to be the ones who take the initiative and be go-getters; set goals and achieve them.”

Walters however, said that while the sessions were interactive, there should have been more emphasis placed on Caribbean integration.

“We identified problems and came up with solutions which would be feasible and we [now have to] take them back to our countries. Another thing that we were encouraged to do was to lobby with our governments to provide better social services and amenities for our individuals. However, for us to do that we can’t just go and ask governments to do it on their own. We’re going to be the ones who actually provide the facilities in order to have these programmes initialized within our own countries,” Mr. Walters explained, adding that greater discussions on Caribbean integration would have made it easier to see the projects to fruition.

RYLA 2010 was held under the distinguished patronage of Minister of Youth Empowerment, Sports and Information in the Federal Government, the Honourable Glenn Phillip.