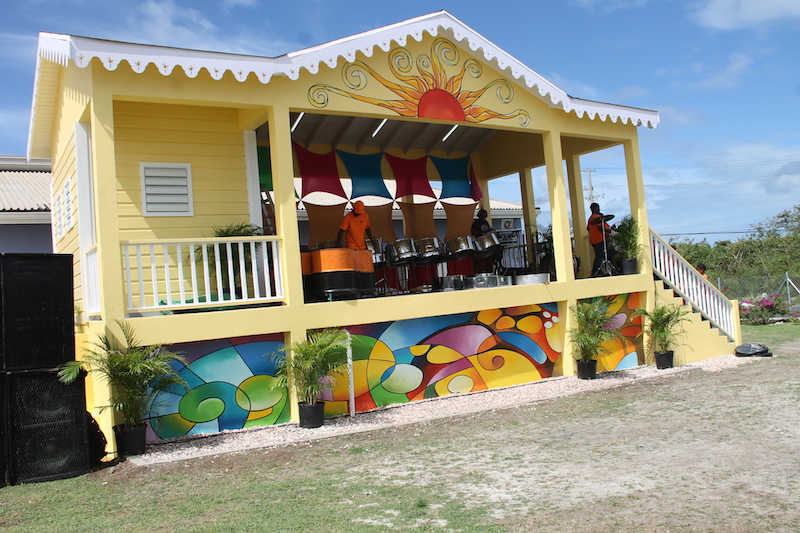 The newly constructed Band Stand at the Artisan Village in Pinneys on May 24, 2018

NIA CHARLETOWN NEVIS (May 25, 2018) – A popular tourist attraction on the island, the new look Artisan Village, was officially opened at Pinney’s Estate next to the Nevis Craft House on Thursday, May 24, 2018.

At the opening ceremony, Hon. Mark Brantley, Premier of Nevis and Minister of Tourism spoke of the Ministry of Tourism’s thinking behind the new facility.

“We’re very happy that we have been able to create here with these chattel houses, this beautiful stage, a gazebo, restaurants, snacks, all kinds of things local. … It is a wonderful opportunity, I think, to showcase all things Nevisian… If our own people can come and enjoy it, and if tourists come and enjoy it, then that’s an added bonus,” he said.

Mr. Brantley also thanked the local contractors and architect for bringing the concept to life.

“I want to single out the contractors and the artisans themselves who created what you see here… From looking around, you can see the tremendous value that we have sort to create here,” he said.

Mr. John Hanley, Acting Permanent Secretary in the Ministry of Tourism, explained that the Artisan Village serves as a central point which features Nevis’ vibrant culture.

“This is a central point for artisans, one-stop shop for those looking for authentic souvenirs of Nevis, a venue for showcasing of live artisan skills, a centre for tangible and intangible expressions of vibrant Nevisian culture,” he said.

The Permanent Secretary stated that the estimated cost of the project so far is approximately $EC 1.5 million. Phase one cost approximately $400,000 which was used to establish the first Artisan Village at Old Hospital Road in 2008.  At that time it consisted of six units for the artisans, two gazebos and park benches.

The Village was relocated to Pinney’s Estate in 2015, due to concerns in part raised by the Nevis Historical and Conservation Society. The new site was selected because it was one of a few green spaces around town large enough to accommodate a project of this nature.

Mr. Hanley, also noted that the new site offers the advantage of being more accessible to visitors and distinct advantage of forging synergies with Nevis Craft House where visitors could experience artisans manufacturing and creating local furniture and souvenirs.

Phase was approximately $800,000 which included expansive work that commenced in 2015. It also included relocation of the original units, fencing, the construction of four additional units, a cafeteria, bathroom and parking facilities, walkways and landscaping.

Phase 3 began in 2017 with the expansion of the snackette, gazebo area, and a covered band stage to provide a focal point for performing arts, expression and entertainment to visitors. The cost was approximately $300, 000.

A cafeteria, F & B – Cafeteria (Marcie’s Tasty Bites and the smoothie shop which utilises only natural local ingredients). There is a bathroom facility with 4 cubicles; a gazebo; an entertainment stage/band stand; a parking lot, and improved linkage to Nevis Craft House

Ms. Camille Kelly was the Architect and Project Manager. Contractor for the project were Jonathan “Sunda” Liburd who completed phases two and three. Contractors Samuel Tyson and Earl Liburd worked on the expansion of the cafeteria, constructed the gazebo, two new units, and assisted with maintenance.

Mr. Vaughan Anslyn designed and painted the artwork on the stage and Artisan Village gate. Mr. Jimmy Simmonds designed and fabricated the sign and it was erected by Mr. Glenville Morton.

Among those present at the ceremony were Acting Deputy Governor General Her Honour Marjorie Morton, Hon. Eric Evelyn, Hon. Spencer and other senior officers in the Nevis Island Administration.