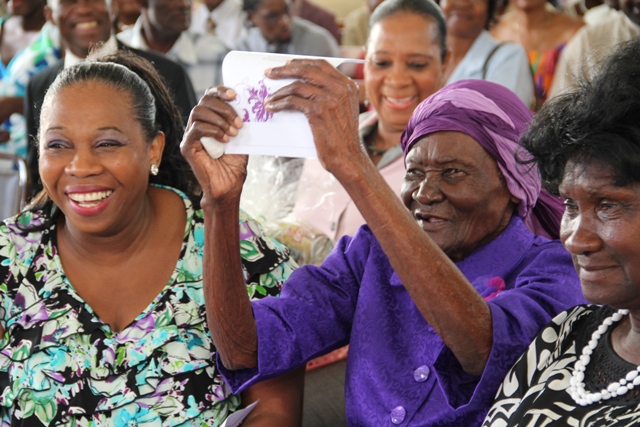 NIA CHARLESTOWN NEVIS (OCTOBER 10, 2019) — Hon. Hazel Brandy-Williams, Junior Minister of Gender Affairs in the Nevis Island Administration (NIA), who rose during a sitting of the Nevis Island Assembly on October 08, 2019, paid tribute to Ms. Celian “Martin” Powell of Zion Village in Gingerland, who passed away recently at the age of 107, four months short of her 108th birthday. At the time of her passing, she was the oldest person in St. Kitts and Nevis.

Mrs. Brandy-Williams, the immediate past minister with responsibility for the island’s senior citizens, said she was using the opportunity to pay tribute and to register sympathies to Powell’s family on behalf of her own family, Hon. Eric Evelyn, Minister of Social Development, who was away on official business, and other members of the NIA.

The minister noted that Ms. Powell lived an exemplary life, and her passing was also a loss to all of Nevis.

“Celian “Martin” Powell lived an exemplary life. I think it was in the 1970s that she became an amputee, and even after losing one leg she continued to live a very rewarding life. She continued to raise her grandchildren and great grandchildren as well as imparting words of wisdom to members of the community in which she lived in Zion, and so, her passing is not only a loss to her family but I would dare say to the entire island of Nevis,” she said.

Mrs. Brandy-Williams urged Ms. Powell’s family not forget the memories she left them.

“My brief words to the family will be to cherish the moments that they would have spent with her and the memories they would have had over the past 107 years of her life.

“I believe that she has fought a good life. She kept the faith but now she must rest and so on behalf of my family and I would dare say on behalf of the Nevis Island Administration, I would like to wish the entire family our condolences and may her soul rest in eternal peace,” she said.