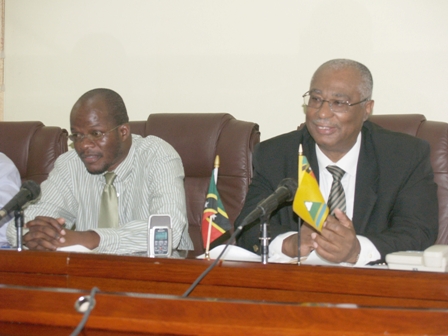 CHARLESTOWN NEVIS (November 26, 2010) — Attorney General and Minister of Justice and Legal Affairs in the Federal Government Hon. Patrice Nisbett, described the passage of landmark legislation which would allow the Nevis Island Administration (NIA) to collect corporate taxes between $4-10million annually from businesses operating on Nevis as a red letter day for the people of St. Kitts and Nevis and a green latter day for the people of Nevis.

Mr. Nisbett was at the time participating in a press conference hosted by Premier of Nevis and Minister of Finance Hon. Joseph Parry on Friday at the Ministry of Finance’s conference room in Charlestown.

The Attorney General, who hails from Nevis, said there was much in store for the island through the renewed co-operation enjoyed with the Federal Government.

“By the time I have served my first year, the Nevis Reformation Party in consultation and agreement with a trusted and trustworthy Labour Prime Minister would have brought to the people of Nevis untold benefits, merely spoken of by former Administrations in Nevis,” he said.

Mr. Nisbett called on politicians throughout the Federation to simmer down in an era of economic renaissance and to work together, so that the people of St. Kitts and Nevis could become the envy of all.

Also the Federal Representative for the Parishes of St. James and St. Thomas, he used the opportunity to thank his colleagues who supported the passage of the landmark legislation.

However, the Attorney General explained that the Joseph Parry-led NIA in co-operation consultation with the Douglas-led Administration had strategically positioned him in the Federal Government for the expressed purpose of bringing benefits to the NIA and the people of Nevis.

“Let the records show that I have not yet served a year as the Attorney General of St. Kitts and Nevis and we have been able to achieve this significant milestone,” he said.

Mr. Nisbett added that his position in the Federal Government would help to facilitate the much sort after Devolution of Power to the Nevis Island Assembly.

“This [Devolution of Power to the Nevis Island Assembly] we shall do by negotiation and not by negativity; by the knocking of minds and not by the butting of heads; by formidable friendship and fraternity not by feuding,” he said.

The Attorney General pointed to the co-operation between the Federal Government and the NIA which brought the Four Seasons to Nevis in 1986 and their subsequent actions which saved that establishment from closure in 2010.

“The re-opening on December 15th is a literal dream come true. I want the good people of St. Kitts and Nevis to know that the Federal Government has played and is playing its full part in the rebounding of the Four Seasons,” he said.