CHARLESTOWN NEVIS (April 29, 2010) — In an effort to continually satisfy the needs of water consumers on the island, the Nevis Water Department embarked on a process that would ensure the delivery of correct water pressure to homes and businesses throughout the island.

The Department’s Manager Mr. George Morris disclosed in a recent interview with the Department of Information, that they were in the process of installing several pressure reducing valves that would cut down the pressure. He also explained the reason behind the exercise.

“It was necessary to install this piece of equipment at this time because we are coming from a very high elevation, the reservoir is situated at Morning Star which is up high relative to where Prospect and Cherry Gardens and the surrounding areas are.

“So because the water is coming from that height, the pressures in the low lying areas would be out of range and these devices would help to reduce that sort of pressure that one would get in their homes,” he said.

The installation of the pressure reducing valves fall under a master plan from the Caribbean Development Bank  (CDB) Mr. Morris noted 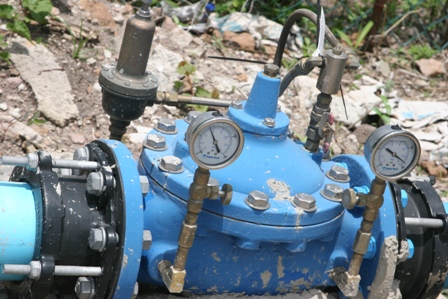 One of the pressure reducing valves installed in Prospect.

“This forms part of the master plan which the MMM Group has done for us on Nevis. That is all in conjunction with the CDB project which will come on stream probably later next year. They did a Zoning Plan for the island so the introduction of various pressure reducing valves form part of that project.

“The MMM Group is from Canada which was hired by the CDB to draw up a master plan for Nevis. It is all to do with the loan that the government will be taking from the CDB which I understand has been approved,” he said.

The master plan would provide for better water distribution on the island which would encompass pumping lines, reservoirs, equipment etc. Mr. Morris said since the development of three major wells with the capacity to provide 1.5million gallons of water per day, major pipelines for the movement of greater volumes of water was necessary to accommodate the additional water and there was also the need for larger pumping stations and additional storage.

“So that would put us in a good position up until 2021 to alleviate the movement of water during drought so that everybody can enjoy a 24 hour supply and be in a position to have a surplus of water for emergencies,” the Water Department Manager said.