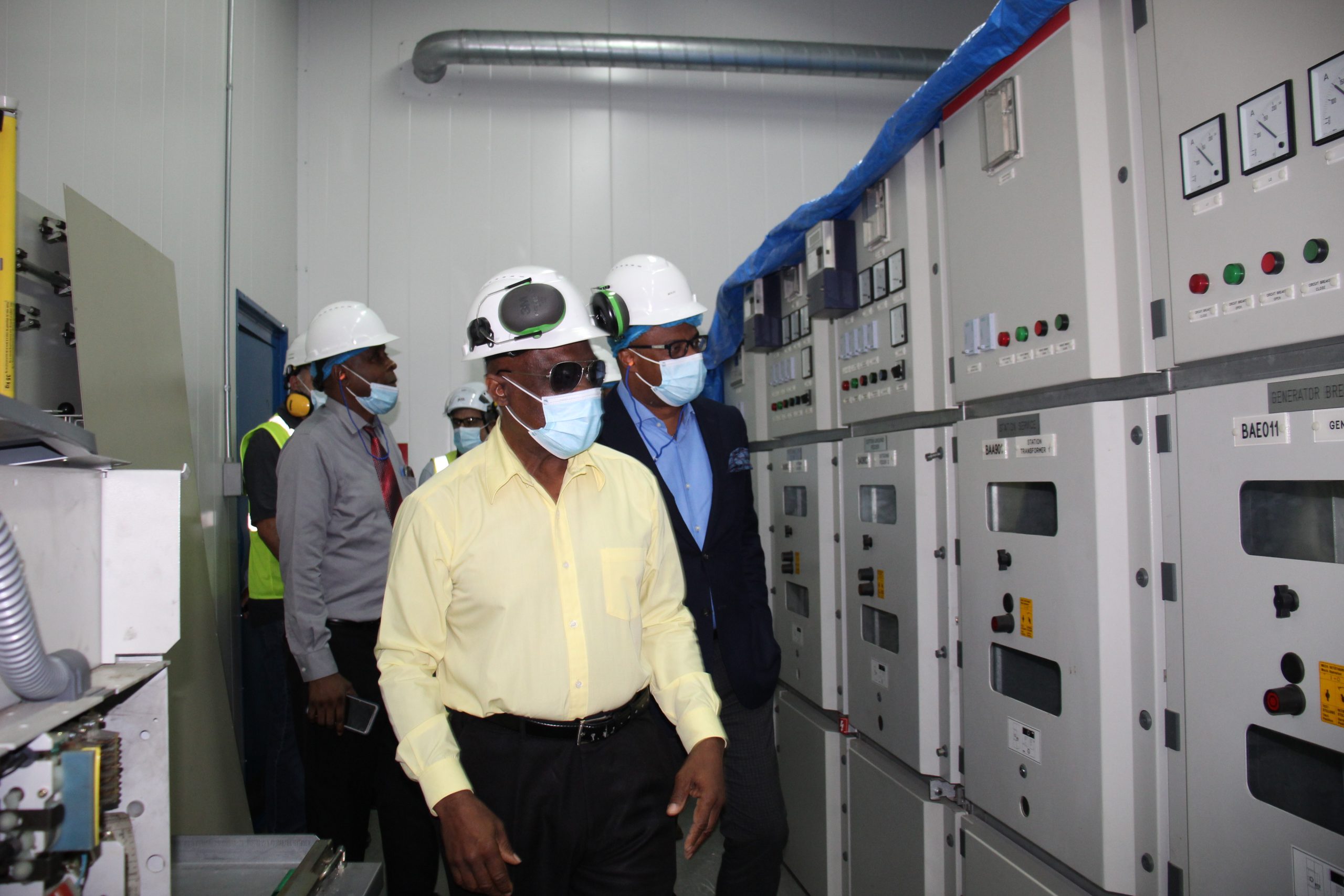 Hon. Mark Brantley, Premier of Nevis and Minister of Public Utilities and Energy (second) and other members of the Nevis Island Administration Cabinet on a tour of the Nevis Electricity Company Limited’s Power Plant at Prospect on December 02, 2021, led by Mr. Earl Springett, Generation Manager and Project Manager

Hon. Mark Brantley, Premier of Nevis and Minister of Public Utilities and Energy, who was accompanied by Deputy Premier Hon. Alexis Jeffers, Hon. Eric Evelyn and Hon. Troy Liburd on a tour of the facility on December 02, 2021 expressed satisfaction with what they had seen.

“We were all very impressed at what we saw here at the plant, the modernity, the sophistication that everything here now is fully automated, fully computerized and we are very, very impressed with what we are seeing…

The entire team, we just want to say thanks to you. We know the general manager could not be here this morning but we want to say thanks to him as well for all the hard work that you’ve been doing in ensuring that the people of Nevis stay powered up, and that we continue to have lights all over the island especially now at Christmas that we keep the power on,” he said.

Premier Brantley noted that the investment of a new generator was a timely one and one which would allow for greater flexibility to look at renewable energy without having to worry about whether the demand for electricity could be met.

The Premier underscored the commitment of the NIA through NEVLEC to provide a clean, affordable and stable supply of energy to the people of Nevis.

“That is what we have been seeking to do and we will continue to do so,” he said.

Premier Brantley explained that the provision of a stable power supply is critical, particularly as the NIA continues to seek more investment which will bring greater growth.

“We see more construction, more homes and buildings going up, we understand that we are going to have an increase in the demand of power, and so I really want to thank Chairman Tross and his Board and I want to thank the Cabinet colleagues who willingly supported this major undertaking for us, this major investment for us, and I want to thank the men who make this all possible, who run the plant, who run NEVLEC and ensure that the people of Nevis have a reliable power source,” he said.

Meantime, Mr. Earl Springette, Generation Manager and Project Manager explained that both the NEVLEC and Wӓrtsilӓ teams have been coordinating to ensure a successful and safe completion of the implementation and gave an update on the project’s status.

“We are about 80 percent completed in terms of the project and it’s been going very well. Between now and the end of the month we will be doing some pre commissioning of the fuel system, the lube oil system and the air staring system.

“Hopefully by early January we will be commissioning and doing our performance test by maybe the third week of January, and we should have the engine in commercial operation maybe the first day in the fourth week of January,” he said.