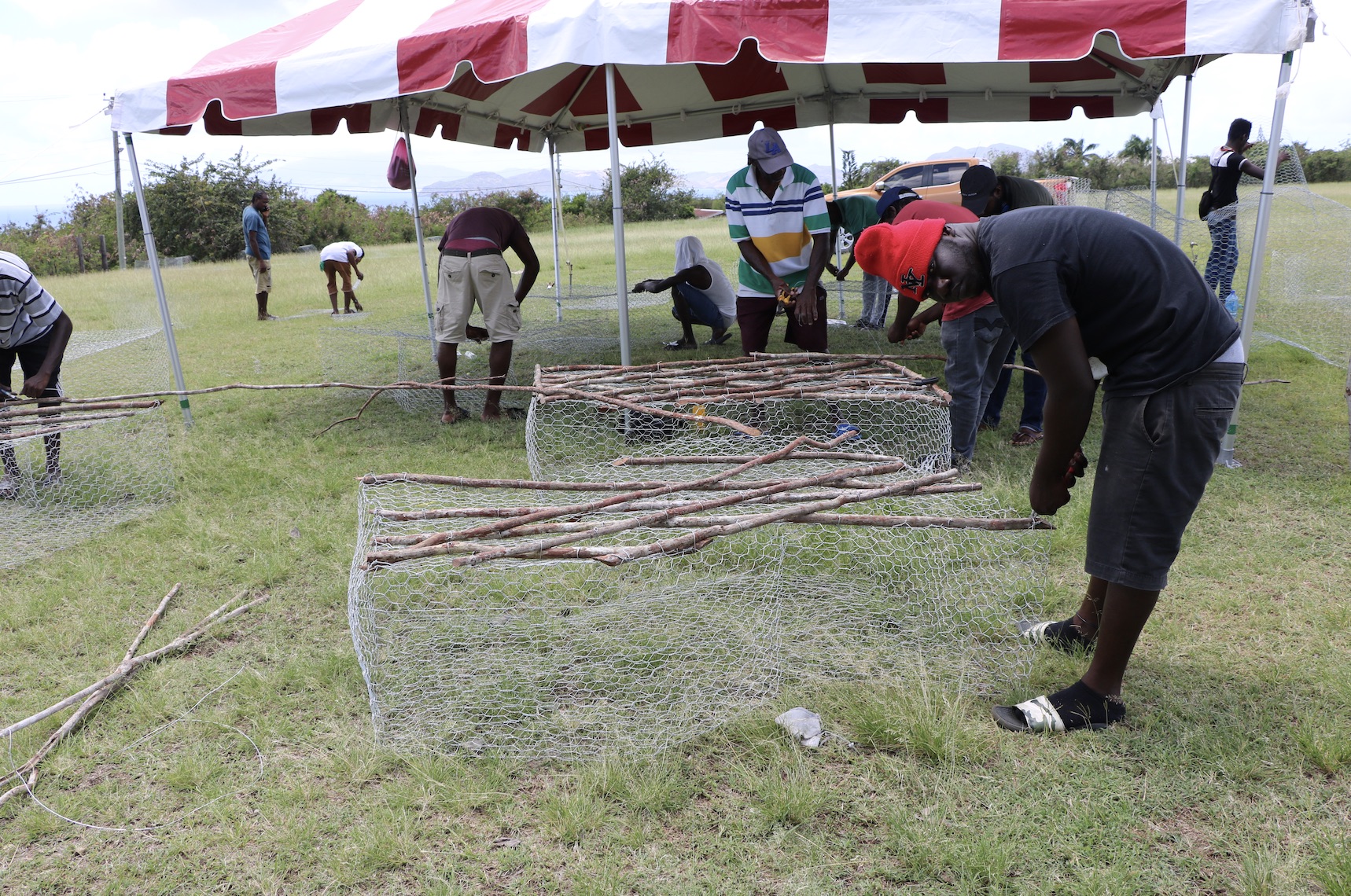 Participants constructing fish pots at the Department of Gender Affairs Fish Trap Making Workshop for boys and young men at the Jessups Playing Field on May 08, 2021

NIA CHARLESTOWN NEVIS (May 10, 2021) — Ms. Latoya Jeffers, Assistant Secretary in the Ministry of Health and Gender Affairs, has expressed satisfaction with the response to the Department of Gender Affairs’ workshop for Fish Trap [pot] Making for boys and young men.

The activity–which is being held at the Jessups playing field from May 08 to 15, 2021, in collaboration with the Jessups Cotton Ground Barnes Ghaut (JCB) Fisherfolk Association and the Department of Marine Resources in observance of the International Day of the Boy Child on May 16, has attracted 20 participants throughout the island and from as far away as St. Kitts.

“I am very pleased with the overwhelming response that we have received from the boys… At first to be very honest I was wondering if fish pot making would be a workshop that persons would be interested in but looking around here, I am pleasantly surprised and I am happy to see that, well the young men, they have come out and they are receiving this so warmly,” she said.

Ms. Jeffers also thanked the members of the association for their effort in passing on the skill of fish pot making and the Department of Marine Affairs for its partnership.

Ms. Catherine Forbes, Training Officer at the Department of Gender Affairs, explained that the workshop is designed to not only pass on the skill of fish pot making on to the participants but also to empower them to see it as a money-making skill.

“The hope is that after this workshop they will be able to not just do it for the day but to see it as a business because what we are trying to do from the department is to empower our young folks so that they can be able to gain gainful employment and we saw fish pot making as one of those skills that are fast becoming a skill that is only done by the older folks.

“So we would want to continue that skill… You have heard from even some of the guys that they are seeing this as a future way of earning money. One guy has already set out in his mind how much he would like to make from the skill that he would be gaining over the next two weeks,” she said.

Ms. Forbes is also hopeful that the department can collaborate with fishers in other villages to take the skill to others in the near future.

He said they began teaching them about two weeks ago and they have shown a keen interest, a necessary ingredient in learning the skill.

“Some of the guys that we [have] had, they show a lot of interest and at the end of the day once you show interest it’s good for the fishing industry. A lot of the fishermen now are getting pretty old and then it is important to get some of the young guys into fishing. Fishing really [plays] a big role in the economy of Nevis and it’s very important for the whole of the country to have young guys to get involved in fishing…

“Sometimes they might say fishing is not a good trade but at the end of the day if you put the love and interest into fishing I think you can do well… What we doing is to try and help the guys and teach the guys how it’s done and a lot of the guys are showing real interest and I’m proud of it,” he said.

Also present were Mr. Lemuel Pemberton, Deputy Director of Marine Resources at the Department of Marine Resources in St. Kitts and Nevis. Hon. Hazel Brandy-Williams, Junior Minister of Health and Gender Affairs in the Nevis Island Administration, also made an appearance to interact with the workshop’s participants.